OUR STORY (in a nutshell)

In 2004, the two of us (Ann Betz and Ursula Pottinga, professional coaches, leadership trainers, and dear 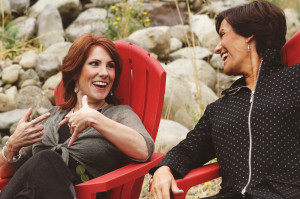 friends) stumbled across a basic theory of human effectiveness and existence: the idea that we are always operating out of two different energy states. Some call these Love and Fear, High Vibration and Low Vibration, Positive and Negative — we quickly learned it didn’t really matter. But what did matter, and was key to the whole discovery, was that our results in life are directly correlated with the state of effectiveness from which they were created. Eureka! The end does not justify the means, according to universal law. The end IS the means.

We found some curious and courageous friends and started working with this theory, which we called Above the Line (in 2008 we found out this phrase was trademarked and so we became BEabove). In Ann’s words, we soon saw it was “deceptively simple and endlessly complex.” The two energies were accurate, but people wanted more. How did different “below the line” or “above the line” energies compare and relate to each other? We knew they weren’t all the same, but how the heck were we supposed to figure out what the real differences were?

Luckily, in the fall of 2004 we came across the brilliant Dr. David Hawkins and his amazing book Power vs. Force. In it, he describes a model of human consciousness — 17 different vibrational fields ranging from Shame to Peace with exponentially expanding energy. This is what we had been waiting for. For the next six years we explored this map as deeply as we possibly could. We expanded on Dr. Hawkins’ work by creating experiential processes and gathering stories and data from around the world. We worked in organizations, with individuals, on retreats, even with women’s groups in remote areas of Nepal and Costa Rica. We taught this model to coaches and leaders, to parents and educators, to teens and to anyone else who would listen. And we worked and worked on ourselves, using our own lives and experiences as laboratories to understand what it is to be human. And everyone we touched on the path, including ourselves, was changed. Many were transformed. All said it helped them make sense of a seemingly chaotic world.

In 2010 and 2011, major new developments focused our work. First, we were encouraged to make it more simple and easier to remember — excellent advice, and thus, the “Seven Levels of Effectiveness” were born. This consolidation makes a complex theory much easier to understand, apply and work within. Second, Ann began a serious study of neuroscience (Ursula joined this study in 2011) and started to weave in fascinating connections to the brain, which further enriched the theory. (See Ann’s blog: yourcoachingbrain for the latest on coaching and neuroscience.)

Today, we work around the world teaching this model experientially, and discovering more layers and nuances as we go. Our work is the gift and the privilege of our lives, and we would love to share it with you.